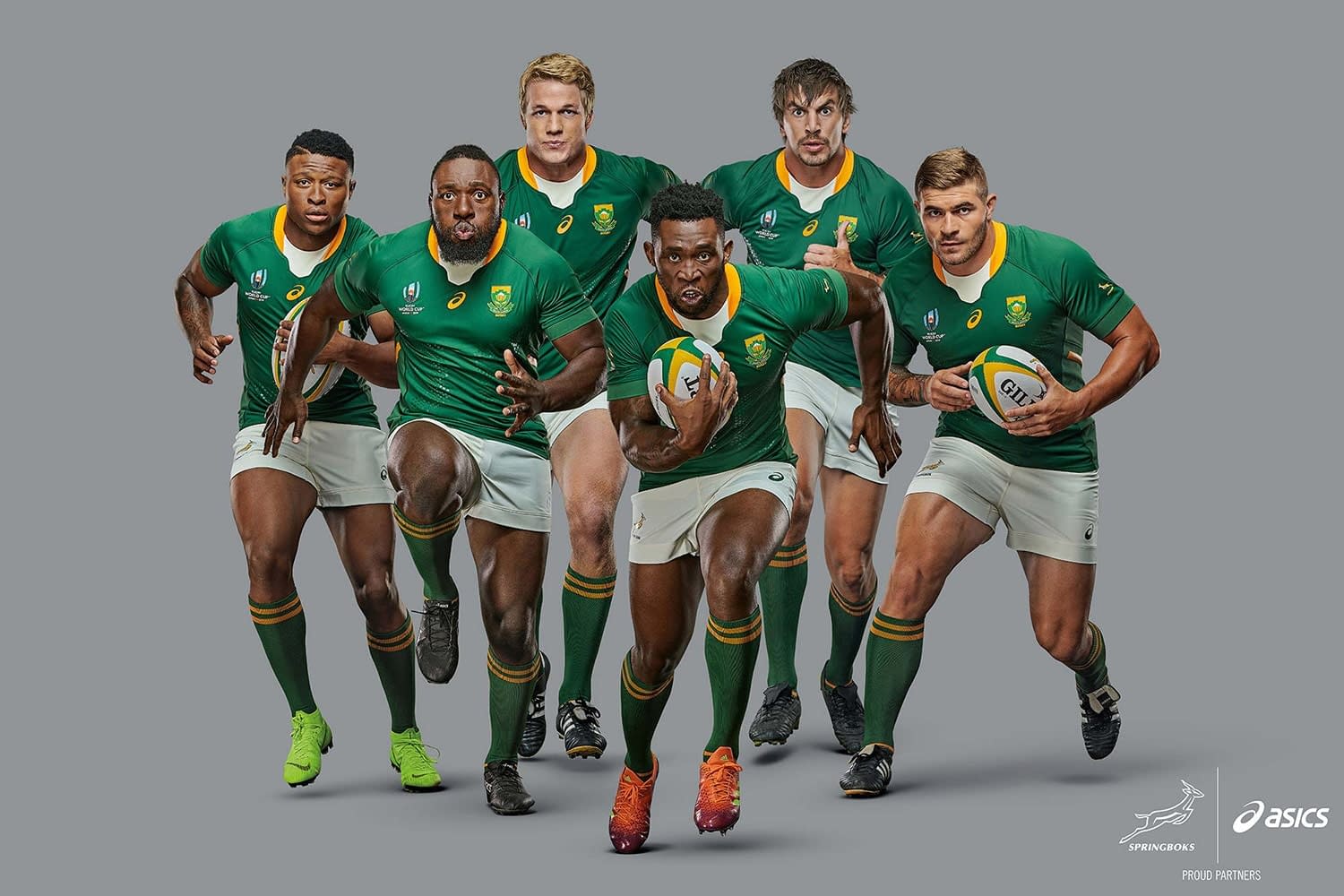 Who can forget the historical victory for Captain Siya Kolisi, the first Black African captain of the Springboks South, as he led the South African rugby union team, to victory at the Yokohama Stadium at this year’s Rugby World Cup 2019 Campaign held in Tokyo Japan?

What made it even more special and memorable is SMITH&DANIELS photographing the Springboks with proud partner ASICS wearing the “unstoppable” jersey, designed and manufactured by SA Rugby’s official apparel sponsor ASICS.

Let’s rewind to 2018 when ASICS commissioned SMITH&DANIELS to photograph the 2019 Springbok and Wallabies Rugby World Cup campaign imagery. The purpose behind the shoot was creating impactful imagery, along with influential “art of movement” campaign images, showcasing ASICS’s latest technology in the World Cup rugby kit. Smith&Daniels shot all images, both locally and internationally for ASICS Global. All images were used in countries such as France, most of Europe, Africa, the UK, Australia and more importantly Japan, where the Rugby World Cup 2019 was to take place. Closer to home the image can be seen and found in all your local stores, including Sportsmans Warehouse’s, Totals Sports and Asics Stores. 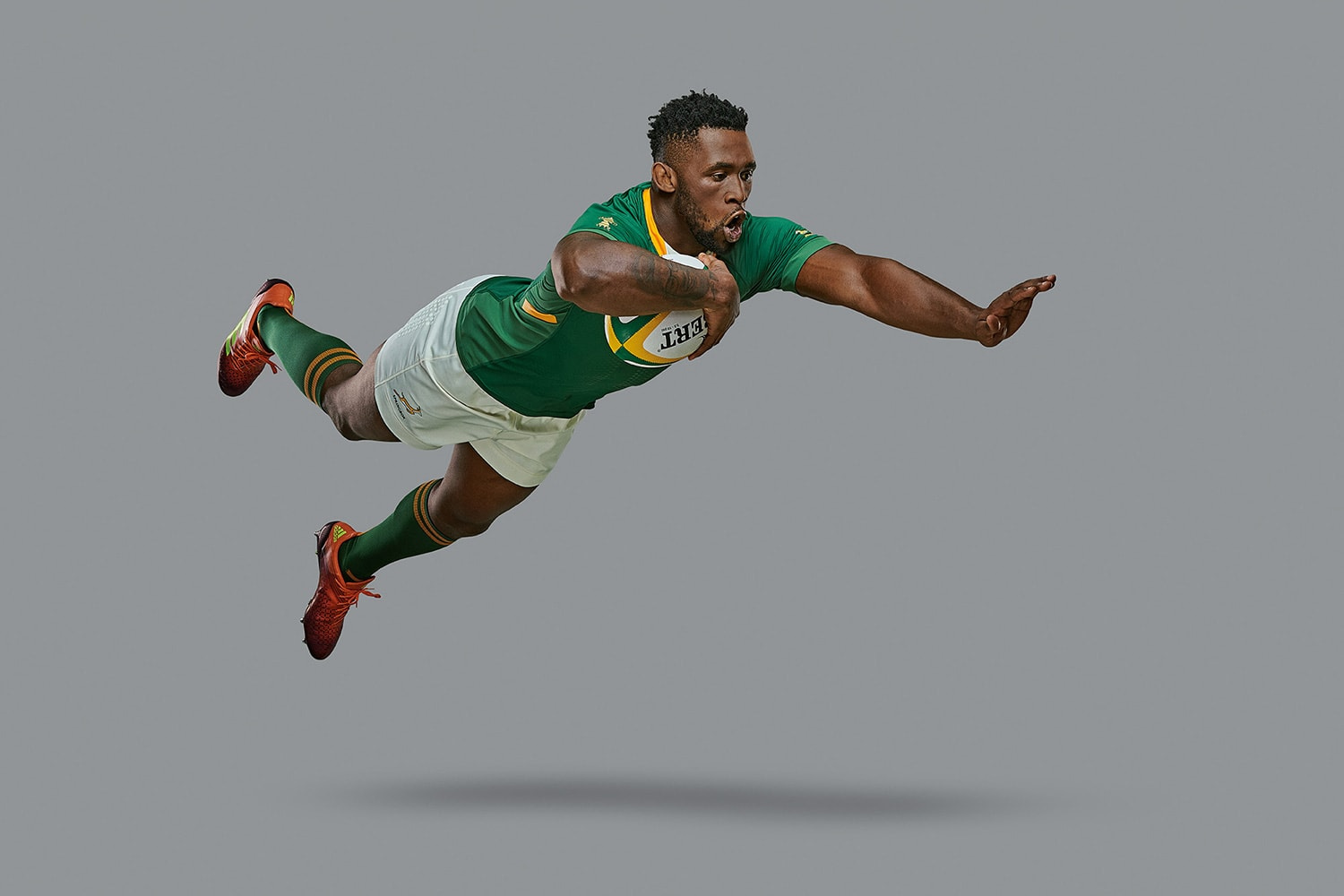 The two shoots took place during February 2019, the first being at Sunshine Co’s studio due to having everything under one roof, from lighting rental to space, to accommodating the players and us. The second shoot was at Rugby Australias training grounds in Australia.

The initial stage of the shoot took months of planning. A lot went into prepping, finding the right location and travel to Australia as well as Cape Town which was to be the Springboks location for the photoshoot.

The brief was then only fine-tuned during the middle of 2018. There was a lot of problem-solving beforehand. I needed the players to dive, to run, but most importantly, I needed them to stop quickly.

For the diving part, I needed something soft for them to land on. This was the first challenge. You don’t want the players injuring themselves, so a medium density foam used to recreate and simulate a dive when scoring a try was used. Then a dense rubberised mat was used to give the players grip on the floor. The next steps were to come up with ideas on which possess and looks we needed to achieve. As I had a background in sports photography and rugby, this was the easiest part of the shoot.

The difficulty comes in when lighting the players as they are always moving at high speeds, from left to right, sidestepping recreating movements found on an open field. I decided to mark off an area, creating a designated target for them to always hit making the first part easier. As with most movements, it’s unpredictable what the lighting will do. I used the marked off area to my advantage, by confining them to a spot or place in the studio made the lighting precise and more accurate, reliable.

With any shoot, a lot of planning is involved with lighting. Rugby is played on a field of 106-144meters, a fast pace game with a lot of movement, hard-hitting action and 15 of the biggest rugby players, per side! So, how did I create all this in the confined spaces of Sunshine Co’s studio? More importantly, how did I photograph this high action?

Let us start with the camera. I used the powerful Nikon D850, using the battery grip gave me 9 frames per second! That’s 45.7 megapixels per image per second for 9fps for up to 51 shots!

The next step was having the best lighting in the business and also freezing this action. Most lighting systems don’t have high-speed sync. What is high-speed sync? “High-speed sync flash is your DSLR’s ability to use a flash at shutter speeds faster than the camera’s native sync. Most cameras have native sync of 1/250th of a second, and anything faster than that is beyond the camera’s ability to sync the shutter with the flash”. So for this shoot, I needed between 500th of a second to 1000th of a second to freeze the action. This is outside the camera’s max sync speed. The answer lay in the Profoto Pro-10 2400 Air TTL Power Pack. The Profoto’s flagship flash can get breathtaking speed and impressive power. Having the ability to freeze a moment captured at 1/80,000 of a second is incredible in itself.

From a campaign perspective, all images were used for in-store promotion use stores such as Total Sports, Sportsman’s warehouse, Asics stores as well as billboard use, both locally and internationally. Asics international loved the imagery. Smith And Daniels had created something new in sport photography, showing that recreating movements found on the field can be achieved in the studio using the right equipment and people for the job. It is, for this reason, why we continue doing work for ASICS on a global platform.

So now the question is, why did Smith and Daniels do the shoot? Well, a simple question with an easy answer! The Springbok’s are South Africa’s biggest national sporting team. Rugby is like a universal language. It doesn’t matter who you are or what language barriers there may be, we all love and know rugby. It was an absolute pleasure covering this campaign along with travelling to Australia to photograph the Wallabies for their AISCS and Rugby World Cup Campaign.

Although my involvement was not on the field but rather in the studio, I feel great pride and privileged to have been part of history in the making, the team that won the title, the World Cup Rugby 2019 Champions.

Go check out my Instagram feed for all the latest updates and news.

To return back to my webpage, go to www.smithanddaniels.co.za